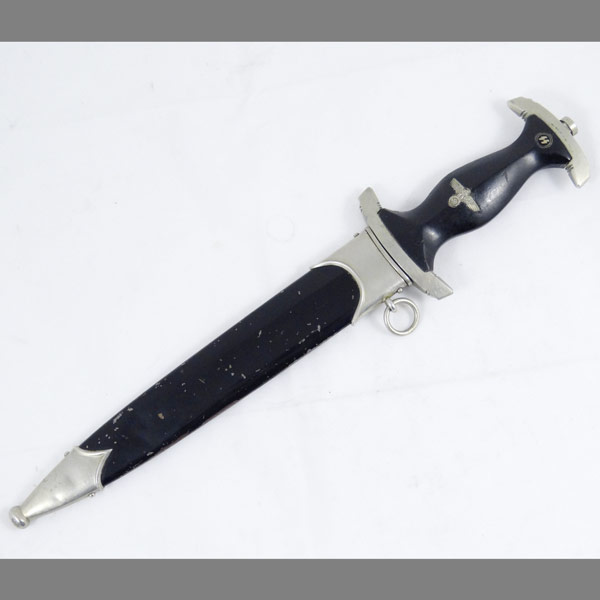 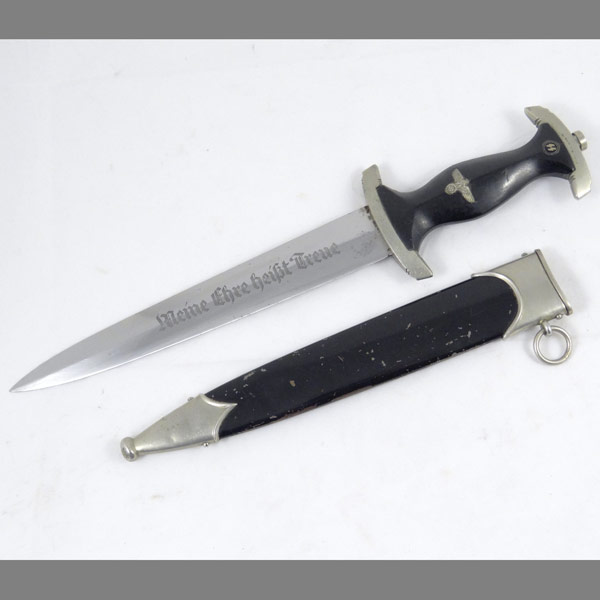 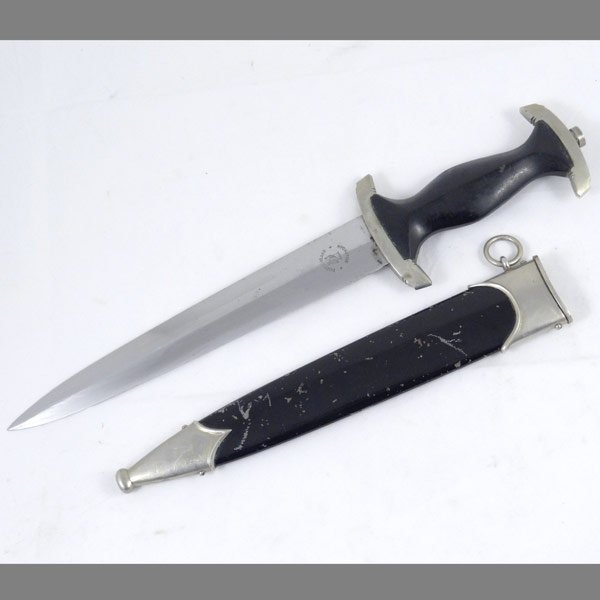 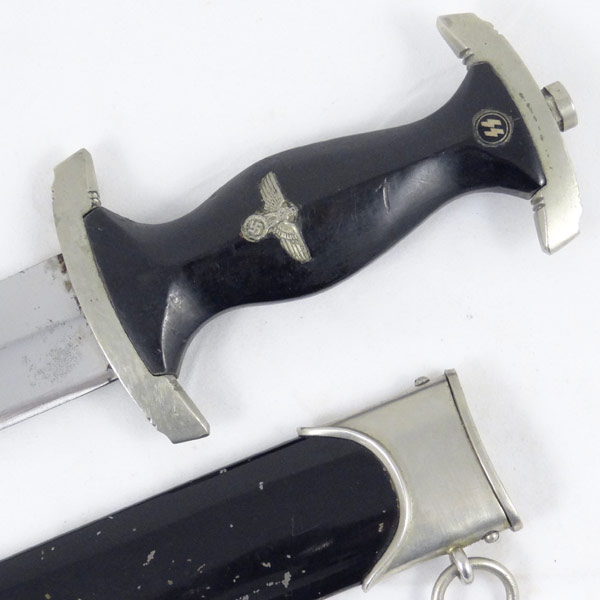 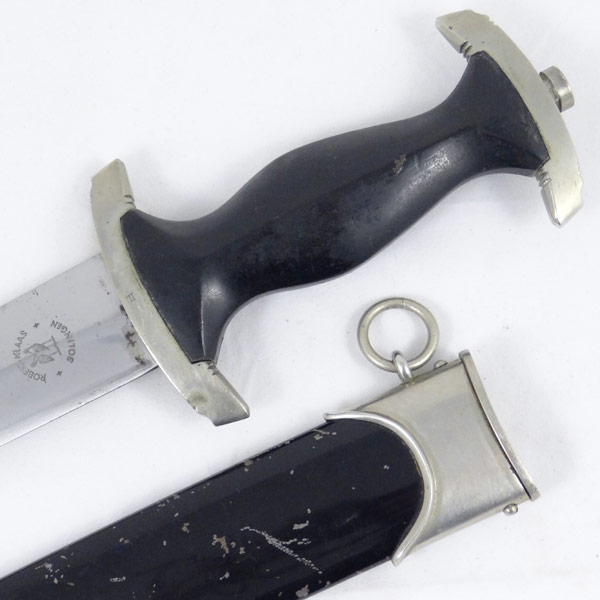 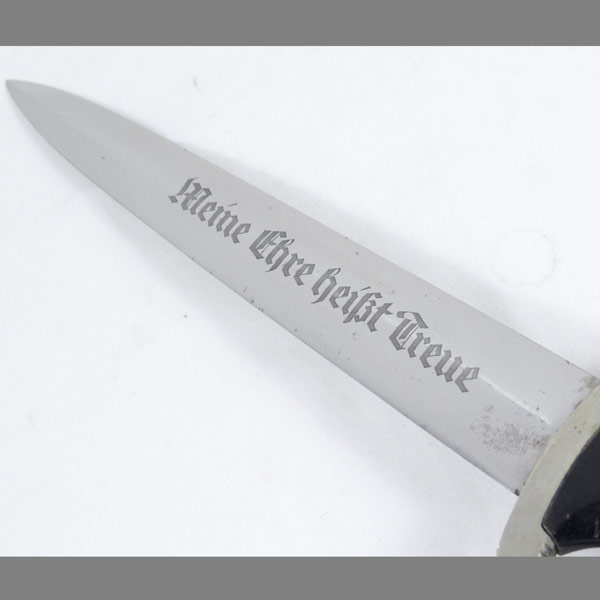 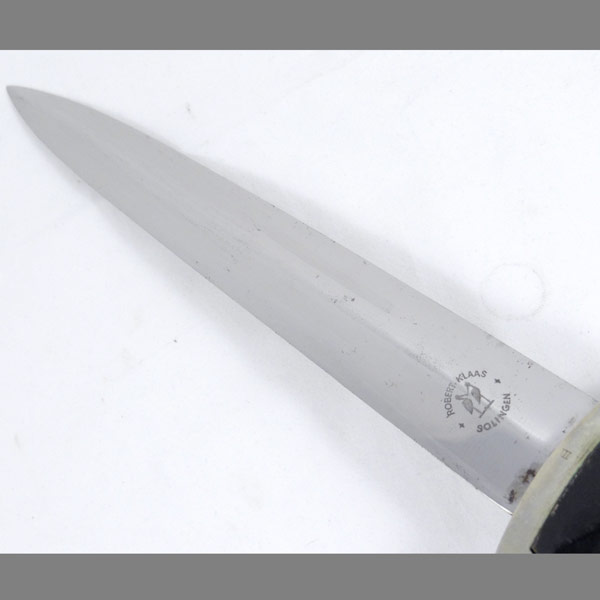 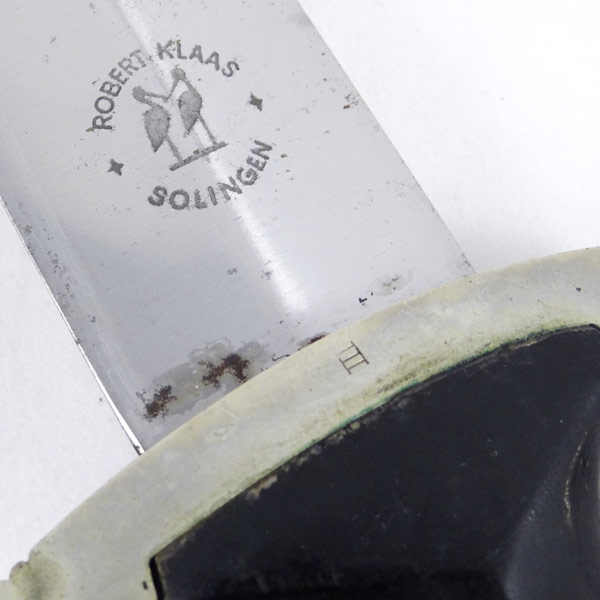 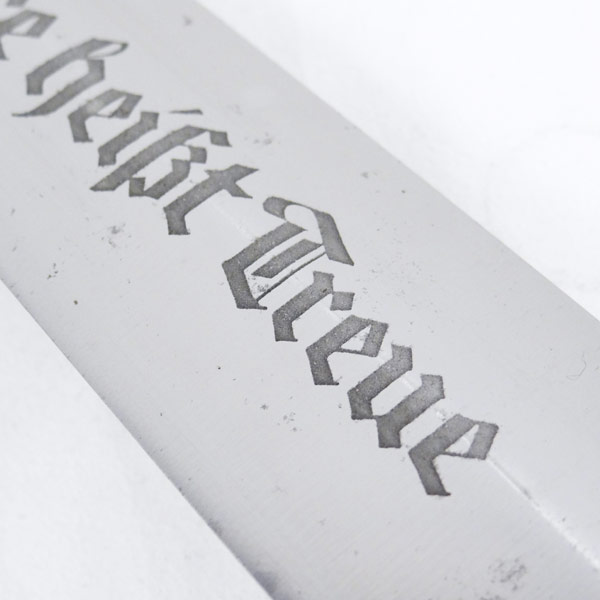 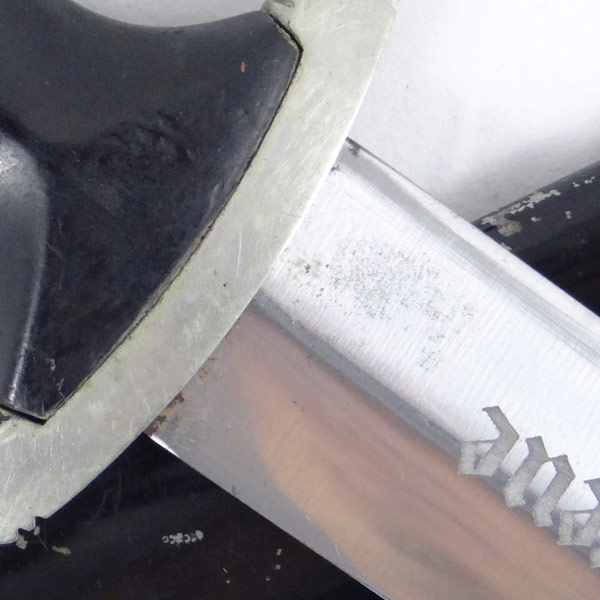 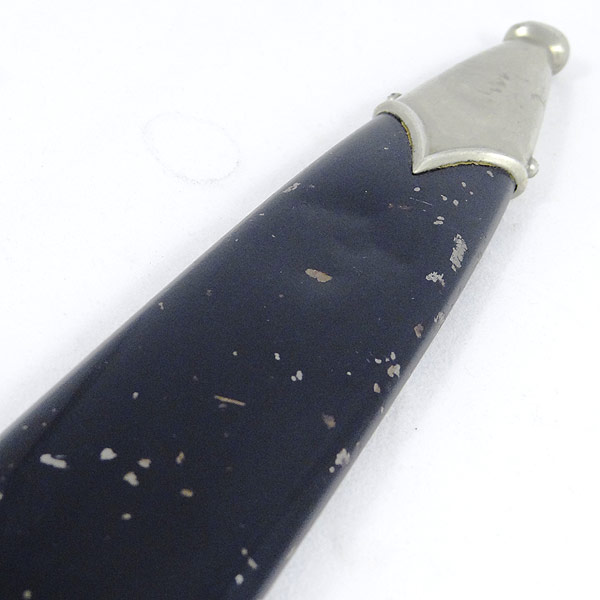 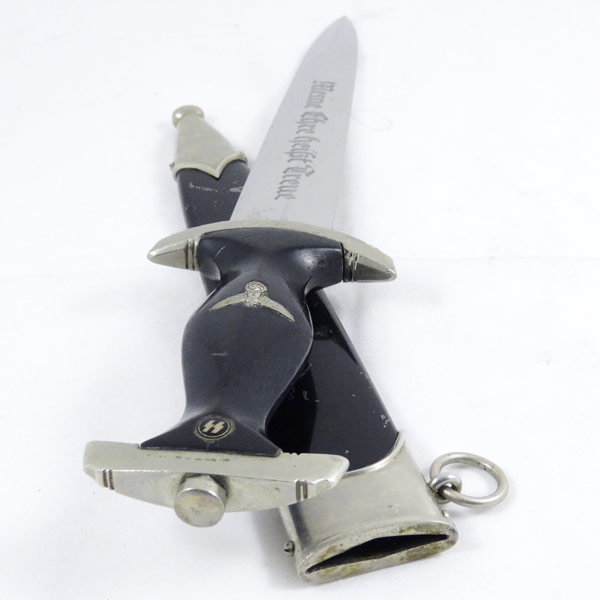 Here’s an opportunity to own an early SS dagger by the highly collectible maker Robert Klaas, with an unbelievably well preserved blade. Oh, and did we mention it is priced to sell? Starting at the grip, we see a nice, solid ebony wood grip, without chips or notable cracks, but with what appears to be a surface repaint…

Here’s an opportunity to own an early SS dagger by the highly collectible maker Robert Klaas, with an unbelievably well preserved blade. Oh, and did we mention it is priced to sell?

Starting at the grip, we see a nice, solid ebony wood grip, without chips or notable cracks, but with what appears to be a surface repaint. It is not known at what point the repaint was applied, or whether or not it was done wartime or post-war. The paint coating was applied very well and evenly, but over time some of the surface paint has chipped away around the SS roundel and eagle. If it wasn’t for the paint chips it would be difficult to tell it was repainted at all. Aside from that, the solid nickel grip eagle shows the same level of patina as the fittings of the grip and scabbard, and has retained approximately 95% of its original detail. The SS roundel is 100%, with no missing or chipped enamel. The pommel nut has a couple of very minor impact marks, but does not show any signs of being messed with (none of the gnarling we sometimes see from these being removed using pliers).

Moving to the blade, this is one of the nicer Klaas blades we’ve come across. Both sides of the blade show normal runner marks, but otherwise a strong cross grain and prominent motto. The “Robert Klass Solingen” kissing cranes maker mark is a nice medium gray tone, as is the motto. There are a couple of spots near the guard on both sides that appears to be dirt, but no effort has been made at cleaning.

The scabbard is a period repaint in our assessment. As the anodizing wore thin on these scabbards (wartime), the original owners were allowed to have them repainted. The paint is extremely evenly applied, with absolutely no brush strokes and consistent in tone and gloss when compared with known period repainted scabbards. There is some wear and chipping to the paint throughout the scabbard (see photos), but overall the paint is still approximately 90%. Along the sides of the scabbard, where the paint has rubbed away from use, it appears the original anodized coating can be observed. The solid nickel fittings have a patina tone that matches the guards. All fitting screws are accounted for and do not appear to have been messed with. The only flaws with the scabbard (aside from the paint wear) are a few impact dings; two small dings to the face of the tip fitting, a small tip ball ding (normal), and a cluster of dings just north of the tip fitting on the scabbard body – all on the same side as the tip fitting dings. We tried to photograph these as best we could.

Overall, this is still an extremely nice dagger from a very sought after maker, despite the issues. Often times we see really nice grips and scabbards, but the blade is trashed. If there is one thing about an SS dagger that collectors prefer over anything else, it’s a nice blade, and this one does not disappoint in the least!