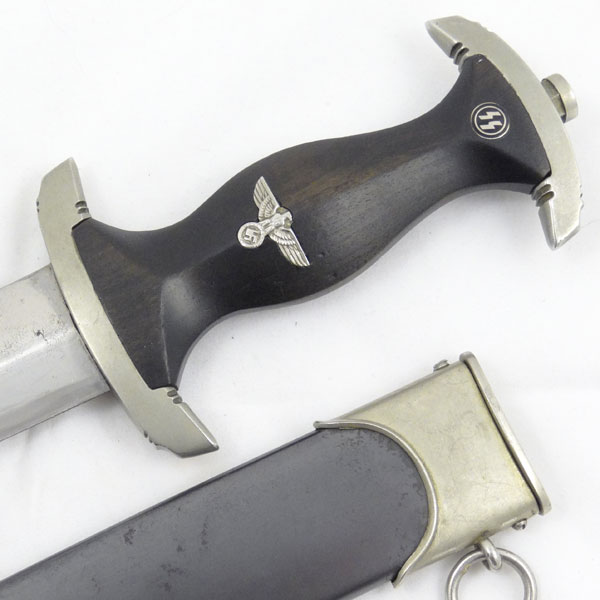 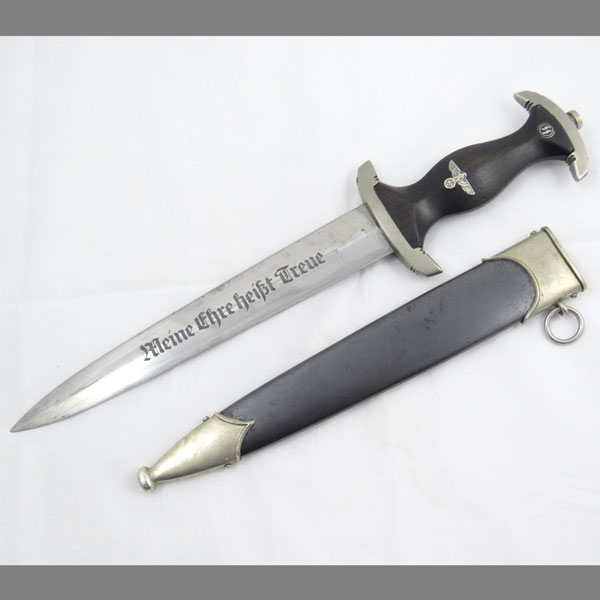 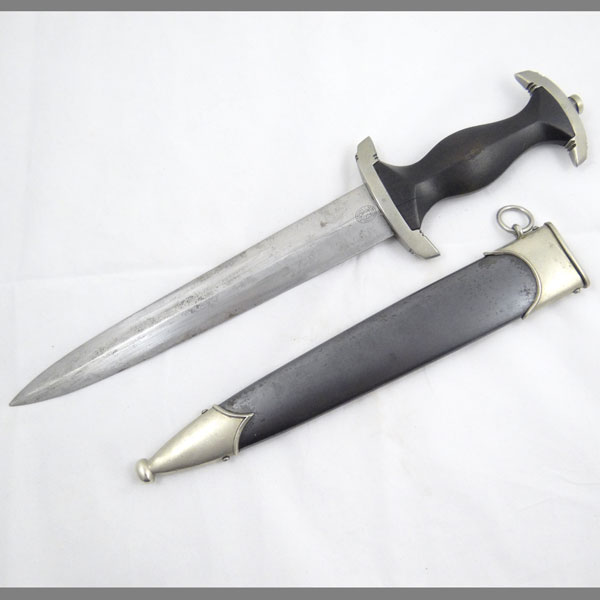 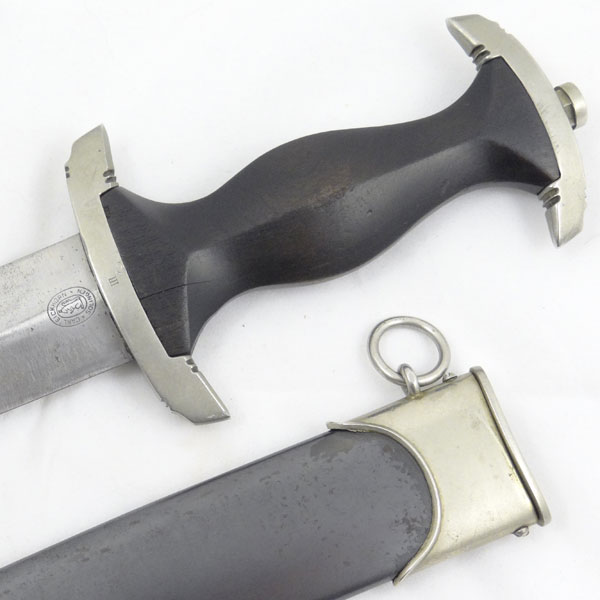 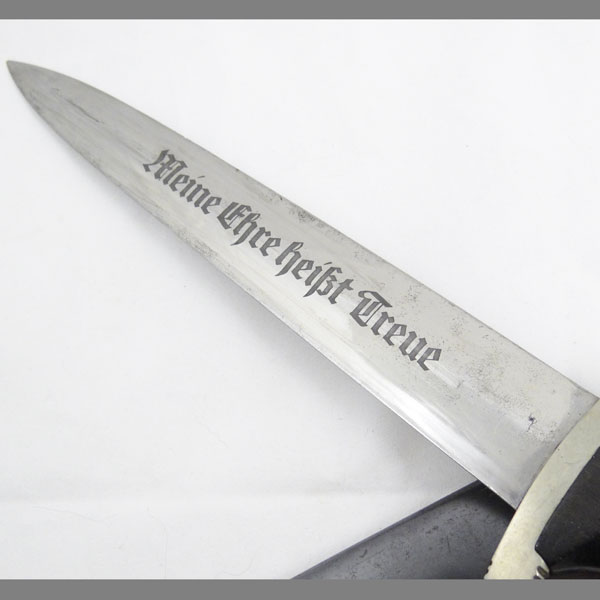 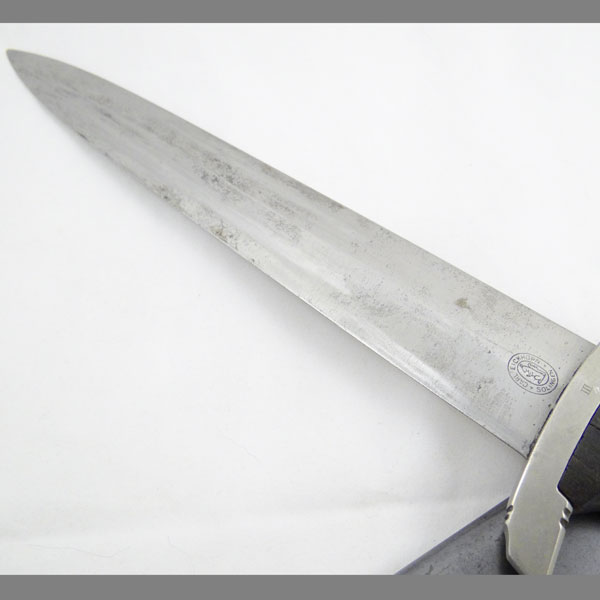 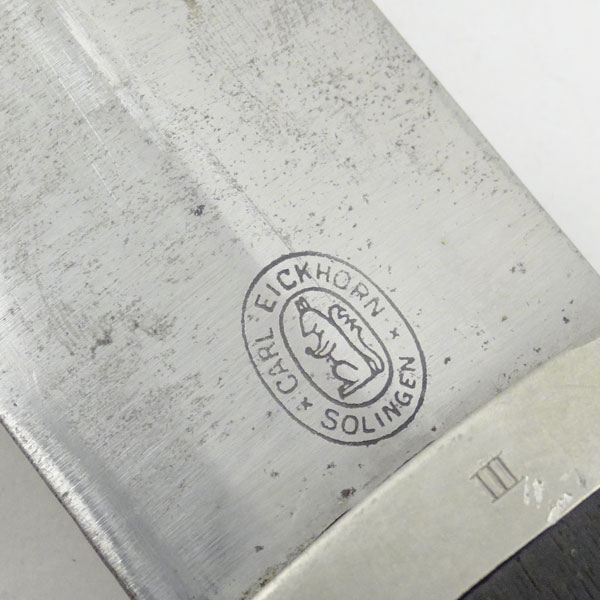 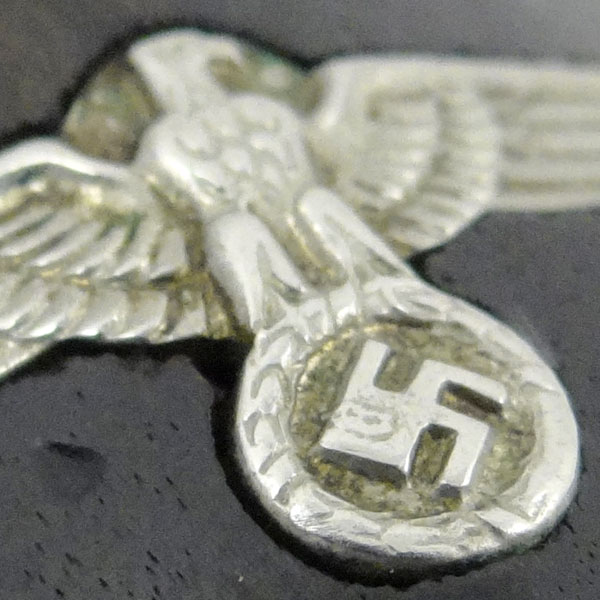 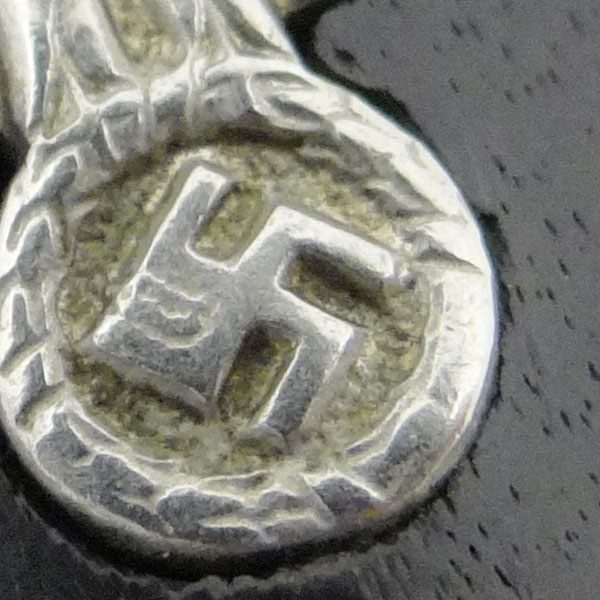 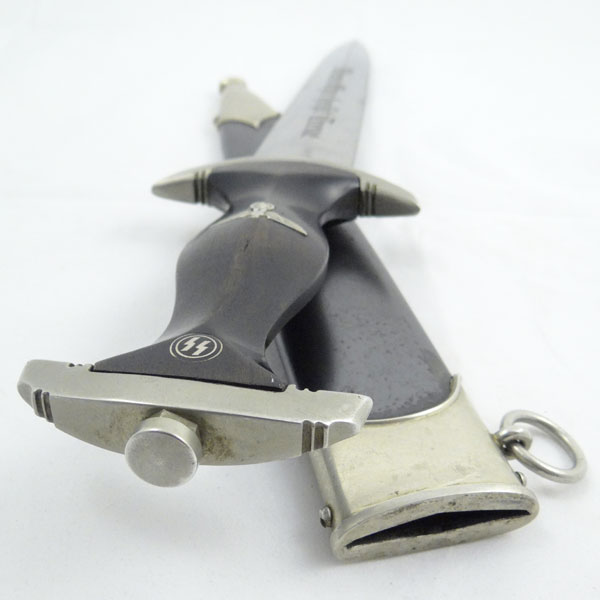 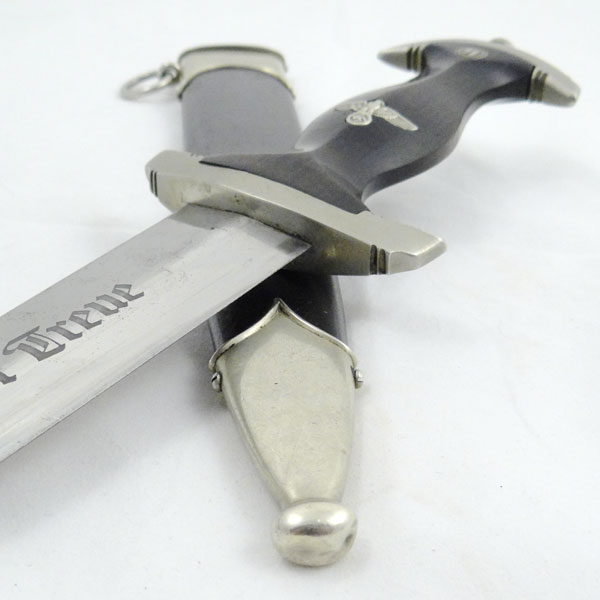 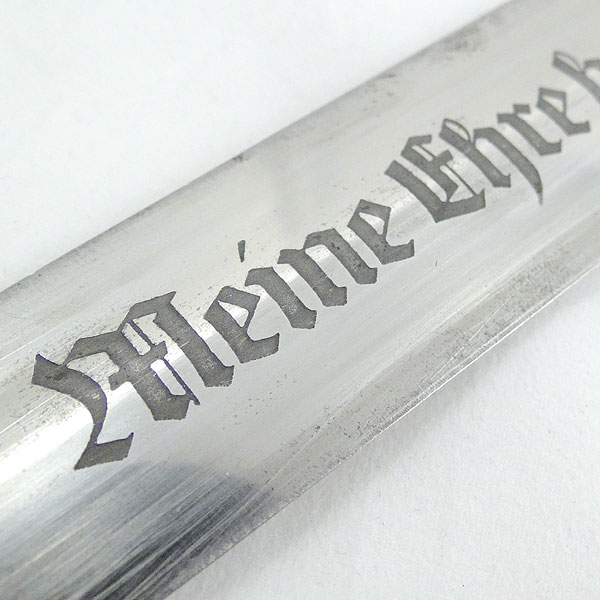 Here’s a real nice one, with a combination of qualities you’ll not find in another SS dagger! An early Eickhorn Ground Rohm SS dagger, in stunning condition, with an uncut Swastika arm on the grip eagle (see photos). The color tones in the grip are beautiful, mixing deep blacks with lighter brown tones (see photos)…

Here’s a real nice one, with a combination of qualities you’ll not find in another SS dagger! An early Eickhorn Ground Rohm SS dagger, in stunning condition, with an uncut Swastika arm on the grip eagle (see photos).

The color tones in the grip are beautiful, mixing deep blacks with lighter brown tones (see photos). The grip overall is in fantastic condition, with the exception of a hairline crack extending from the lower guard just shy of 3/4 inches, and a very tiny (1/8” x 1/16”) surface chip on the same side, also along the lower guard. The crack is very stable (and fixable), and does not carry through to the front of the dagger. There is also a small “rash” area located at the center on the reverse that is consistent with the location of a vertical hanger clasp that was likely once with this SS dagger. Both solid nickel crossguards have the deep hand-cut grooves typical of early Eickhorn guards. The lower guard shows a seldom seen district stamp “III” on the reverse. Other than a couple very minor use scratches, the guards are in perfect condition and show a patina consistent with the metal scabbard fittings. The SS roundel enamel is 100%, without chips, and very little aging whatsoever. The pommel nut shows no signs of removal; no grinding, gnawing or circular scratches from improper removal.

Now for the grip eagle… The grip eagle on this one adds much intrigue to an already stellar piece! As shown in the photos, the arm on the West side of the Swastika is uncut, but you can see the imprint of the die on the surface. This is likely due to a “plugged” die, which sometimes occurred in manufacturing. Typically such a flawed grip eagles would have been discarded, but this one made it through quality control, and even went unnoticed by the recipient (or perhaps he simply didn’t care). Whatever the reason for it not being sent back to the factory for replacement, it is now here for us to enjoy. The eagle overall has retained approximately 98% of it’s original detail, with use wear in the expected areas (the higher areas of the eagle’s breast, legs and wreath).

The blade shows typical scabbard rash along the length, although no more prominent than most. There is also minimal spotting throughout areas of both sides, but again, nothing unusual for these blades. The reverse shows the obvious signs you’d expect to see on a Ground Rohm SS Dagger, however this one appears to be a mix of a field grind, followed later by a factory clean-up. Multiple finishes along the length of the blade lead us to believe this is the case. The motto, “Meine Ehre Heist Treue” (My Honour is Loyalty), as well as the Eickhorn maker’s mark, are crisp and still retain the deep gray tone SS dagger collectors love to see! The tip is a bit more blunt than most (blunt, not bent), hardly worth noting but we like to note everything we observe.

The scabbard is the black anodized type, with none of the oxidation, crazing or rust we typically see on these – this one is a screamer! The scabbard fittings both show a nice patina consistent with the grip fittings. The throat fitting shows only normal use wear, but not scratches or major dings. The tip fitting does show a few minor dings, including a couple small impact dings to the tip ball, but is in otherwise nice shape overall. One of the throat screws shows some signs of tampering, but all three remaining screws show no signs of being messed with.

This is not a particularly rare dagger in itself, being an Eickhorn Ground Röhm dagger, but combined with the uncut Swastika arm this would be a nice dagger to have in your SS dagger collection as there is likely not another like it around, with the same combination of attributes.