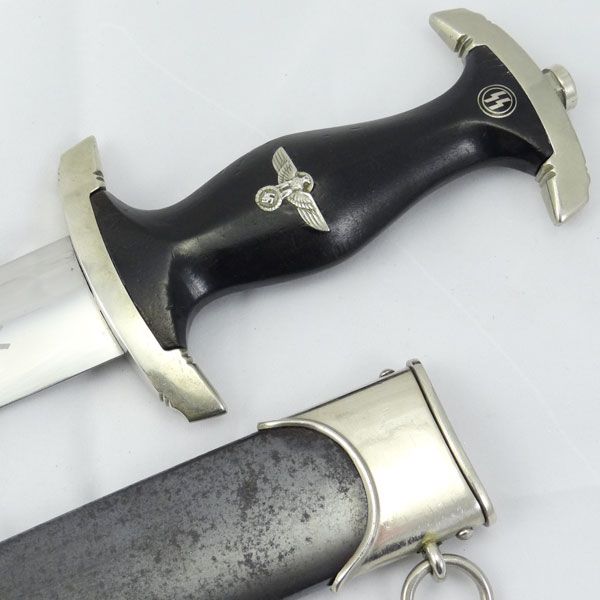 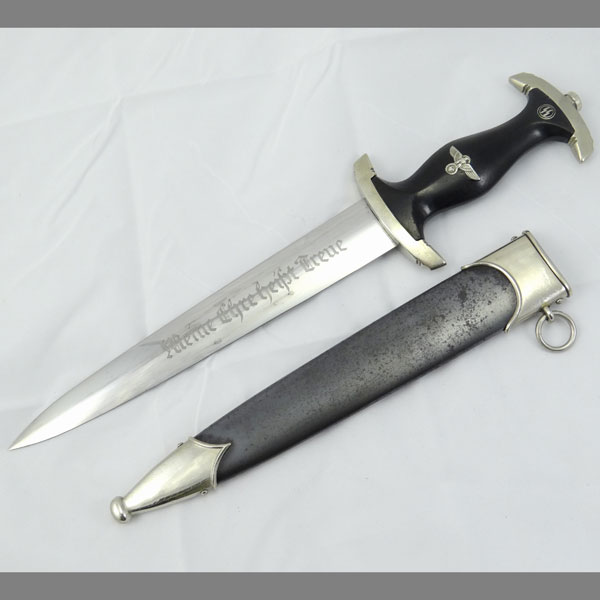 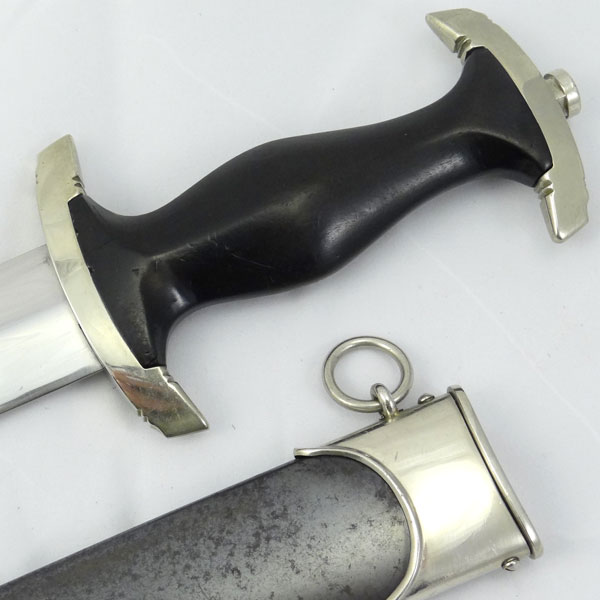 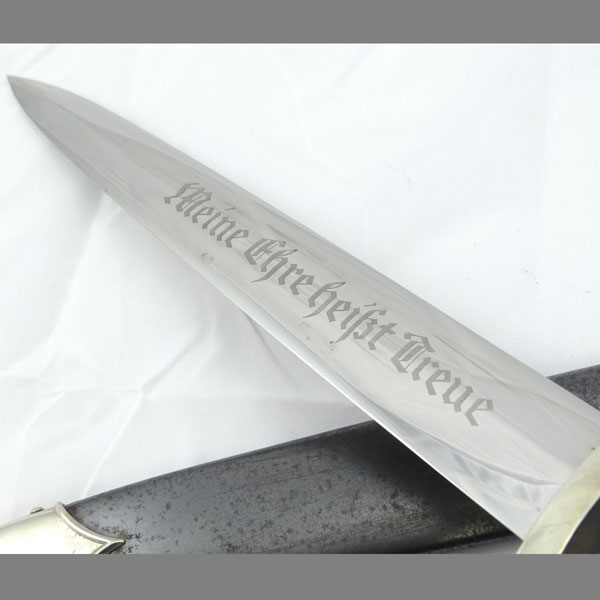 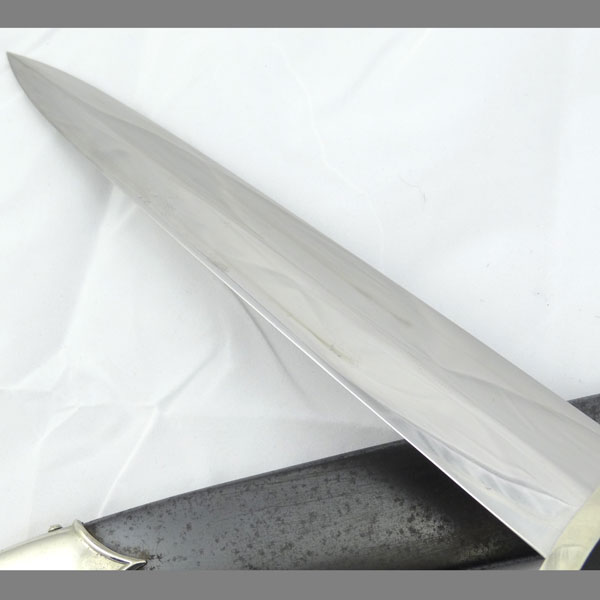 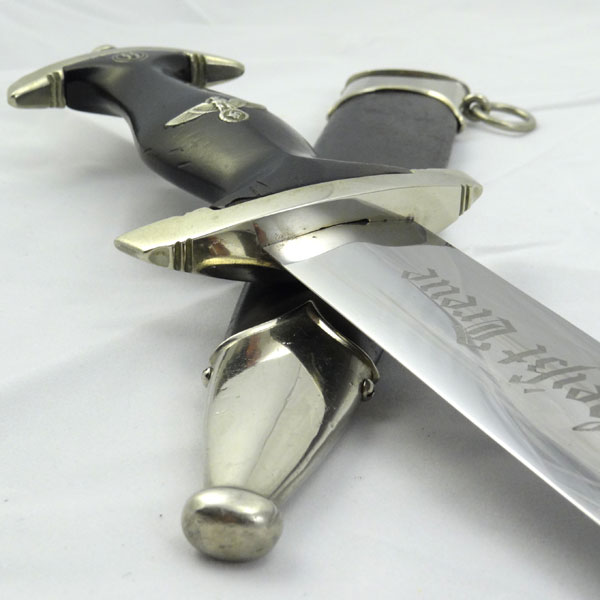 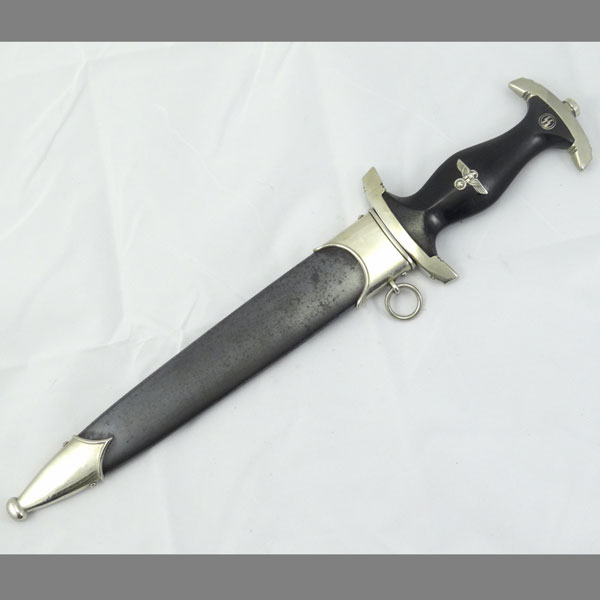 Here is a real find; a very early SS dagger with numbered scabbard, matching high nickel content fittings and a very rare and desirable Gothic motto font type on the blade. This dagger was a vet bring back and was recently acquired from the Vet’s son. The dagger crossguards are the early Nickel type internally marked “PA” with nicely executed accent grooves seen on these type of crossguards. They also show a strong yellow (straw colored) hue when examined under nice even lighting, which is common with these real early daggers…

This dagger was a vet bring back and was recently acquired from the Vet’s son. The dagger crossguards are the early Nickel type internally marked “PA” with nicely executed accent grooves seen on these type of crossguards. They also show a strong yellow hue when examined under nice even lighting, which is common with these early daggers. This yellow hue is the result of a high nickel content over a long period of time (decades), which will yellow with age. Tom Wittmann points this out in his SS reference book (pg 130). The photos shown here reflect this yellow tone, which is consistent throughout the dagger and scabbard’s fittings.

The grip is the painted type with the grip eagle head pointing slightly upwards. There appear to be two die flaws within the Swastika arms that only add to the uniqueness of this example. Although rare, the dies would sometimes get clogged resulting in the Swastika arms being partially or completely uncut. The runes button is in spectacular condition, and exhibits a slight green verdigris on the bottom coming from the copper flashing beneath. Aside from a very minor hairline crack that begins at the lower guard in an inconspicuous area, the grip overall is a real beauty!

The blade condition is exceptional; it doesn’t get any better! The motto is a rarity in itself, being the normal shallow etch commonly seen with Early Type A Chained SS blades, but the Gothic font is the rarely seen variant, which is considered initial production. The reverse of the blade has no maker’s mark, which is the result of a complete factory resurfacing after the Rohm inscriptions were ordered removed. Typically the Röhm inscription was factory ground starting just north of the maker’s mark, leaving the maker’s mark untouched. However, it is not uncommon to see the entire reverse of the blade reground, with the maker’s mark completely removed as well. The crossgrain on this blade is so fine it was challenging to show in photos, but is indeed visible.

The anodized scabbard body shows some normal oxidation spotting, but is otherwise in near perfect condition; extremely smooth and without so much as a minor dent! The nickel fittings show the same yellow (straw colored) tint as the guards (see photos), with no evidence of tampering to the screws. The tip fitting is also free of the usual impact dings we’ve come to expect with these daggers.

Perhaps the most intriguing part of the dagger, outside of the rare motto, is the 3-digit number clearly stamped into the scabbard throat fitting. It is known from other examples that, like the cross guards, some scabbard throat fittings were numbered with the SS-Mann’s serial number. On the surface of the throat fitting, where the blade enters the scabbard, is the 3-digit number, “592”. As of this posting the number 592 is not in the SS records compiled by Ross Kelbaugh, but given time this number may be uncovered.

Based on this SS dagger being a very early type it would not be at all surprising to find such a low SS number applied to it. These SS daggers of the earliest production are the most powerful in history and in value. This early example being the 1936 vintage would have belonged to an SS man who had already served his 3 years of consecutive SS service, placing him to be either an NCO or an officer during the tumultuous year of 1933.