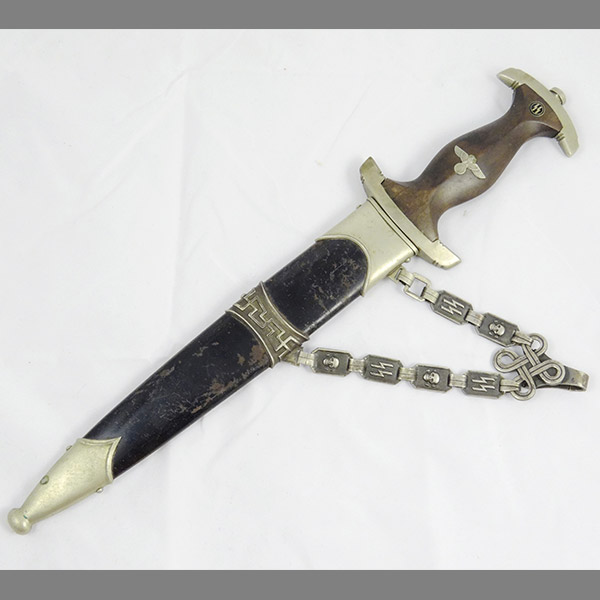 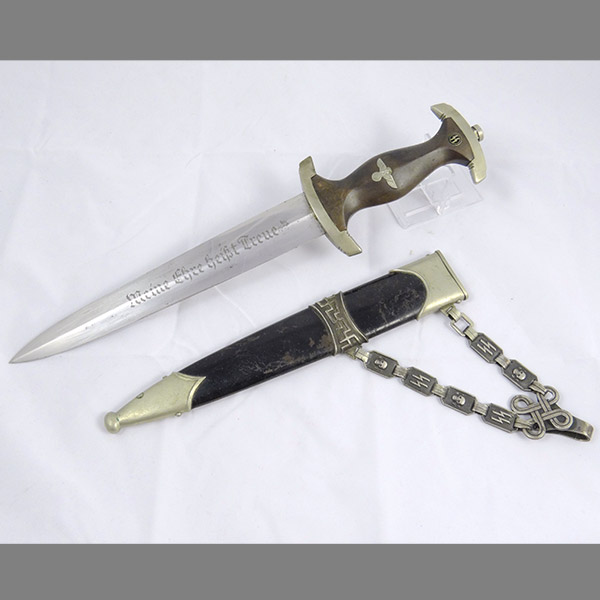 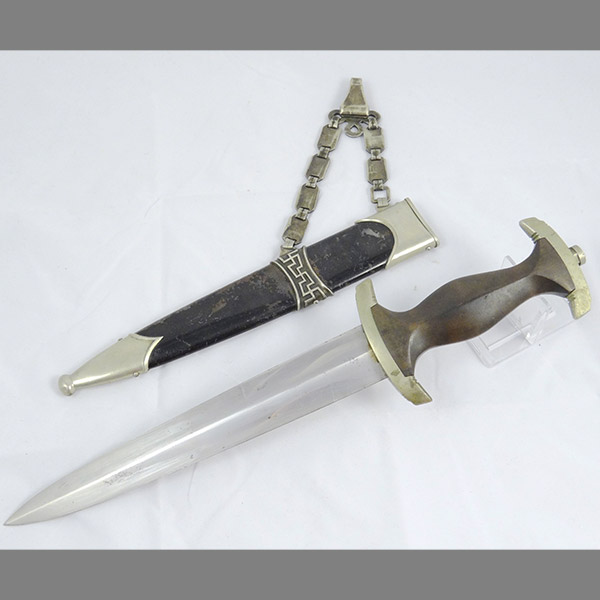 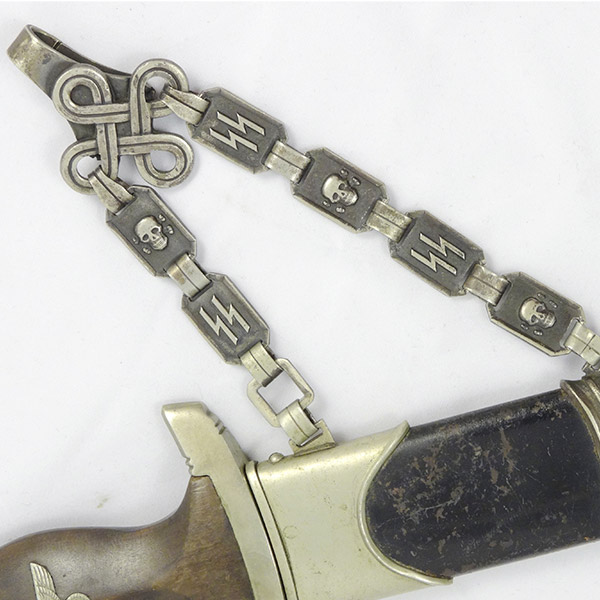 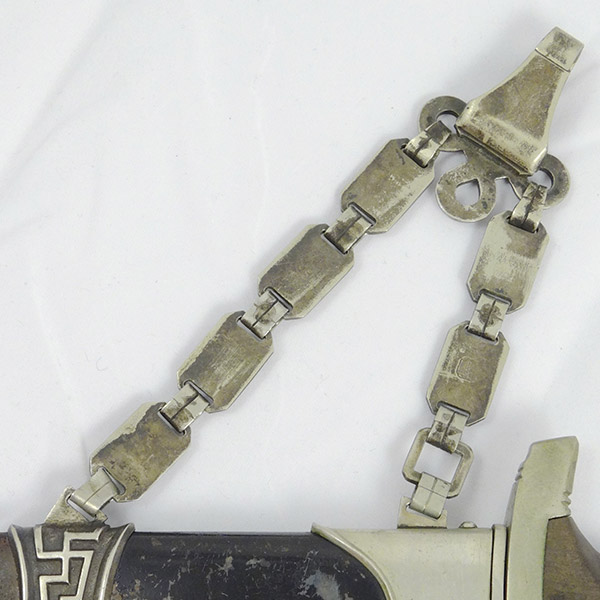 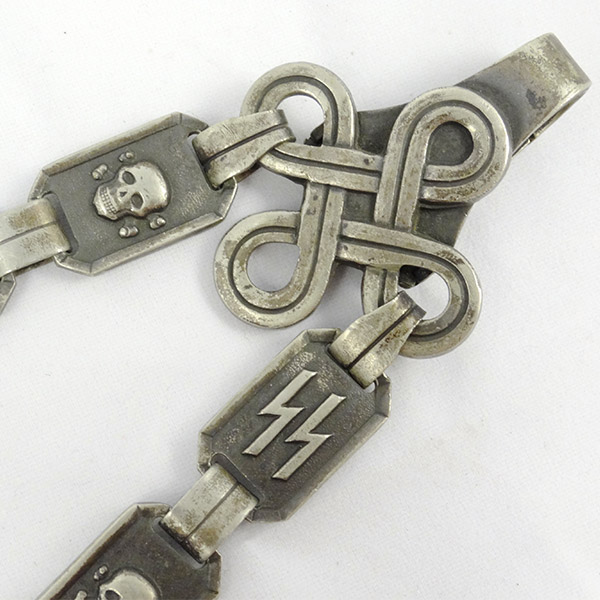 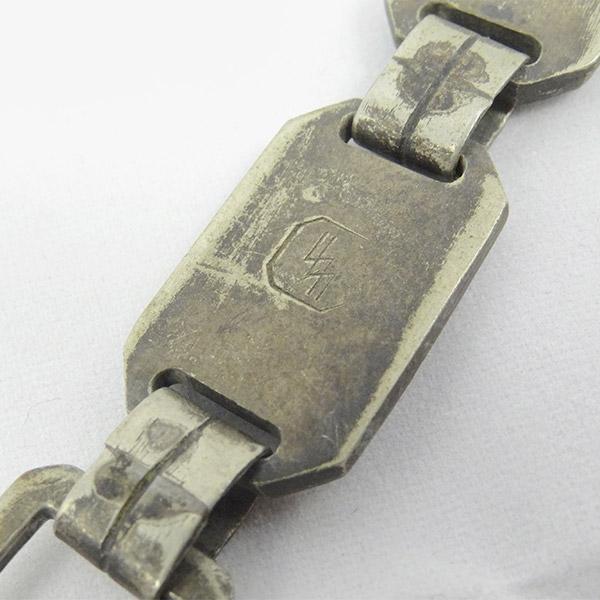 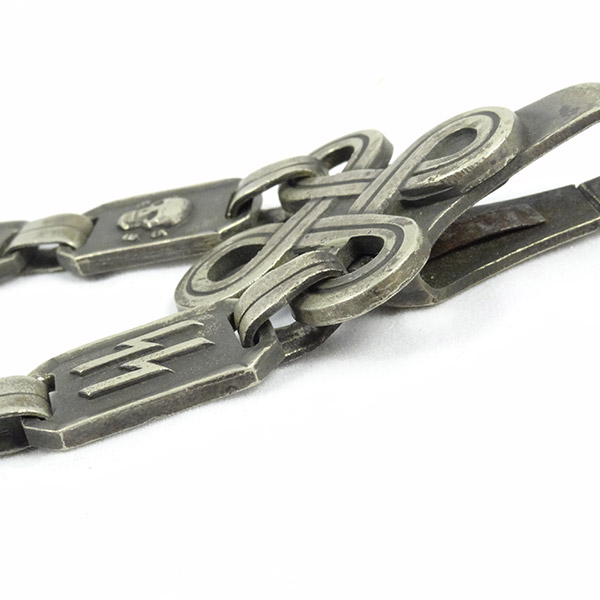 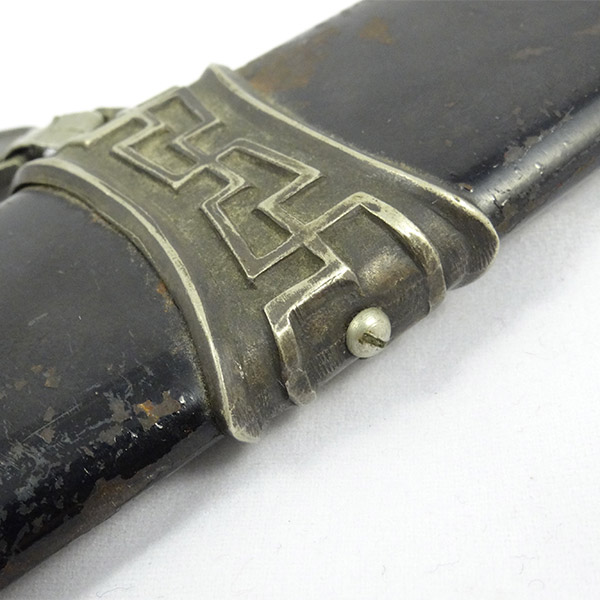 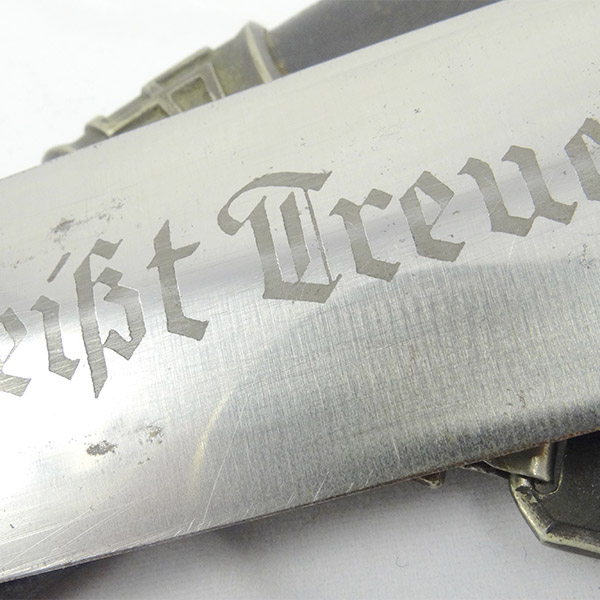 The grip is a really attractive dark brown tone (about the color of dark chocolate) with shadows of black throughout. Some of the photos make it appear more brown than it really is. Aside from one hairline crack on the front extending from the lower guard, there are no major flaws to note; just the typical use wear and minor scratches. The solid nickel eagle shows about 95% of its factory detail, with a slight hint of green verdigris around the head where the half circle meets the wood. The SS runes (roundel) are flawless, also with a hint of verdigris around the lower portion, which is typical and something we like to see (a sign the dagger has not been cleaned). The upper and lower nickel guards are dirty, but again this is a good thing! The pommel nut shows absolutely no indications of ever having been turned; no gnawing or swirl marks whatsoever.

Moving to the blade we see one of the nicest chained SS dagger blades we’ve seen in a while! Like most blades this one does have some random spotting, and runner marks, but nothing close to the level that we’d consider distracting. There is no maker mark on the blade (which is normal with these).

The scabbard is the painted type with about 75 – 80% of the paint remaining in tact. As with many of these painted scabbards there is some surface rust where the paint has chipped away. The chains wreaked havoc on these scabbards over the years from constantly beating against them. On the reverse there is also what appears to be a slight impact dent (very slight) right in the area of the center band. There appears to be no damage at all to the band itself, and you have to look very close to even see the recess from the ding (i.e. it is not obvious). The nickel fittings are in fantastic condition, and like the guards are a bit dirty. All fittings screws are securely seated with zero signs of having been messed with. The most wonderful thing to report about the scabbard fittings is the tip ball – it has NOT been smashed as we see so often with these (and other) daggers. This detail alone will make most SS dagger collectors smile with delight!

The Type 2 nickel chain is stunning! The original factory darkening (black backgrounds) of the chain links are 98% overall, which is very challenging to find these days. All links are still closed, and with the exception of the lower link connecting the lower chain to the band, they all have their original oblong shape with very little deviation from use. The lower link that connects to the center band appears to have taken much of the abuse from use, but is still strong and closed. On the reverse we see the expected double “SS” proof stamp on the first link of the upper chain. The wotan’s knot is in pristine condition with a clasp that is fully functional with a nice tight spring.

If you’ve been in the market for a nice Type 2 SS Chained Dagger, but have been waiting for just the right one to open up on the market, don’t second guess yourself. This is the one!