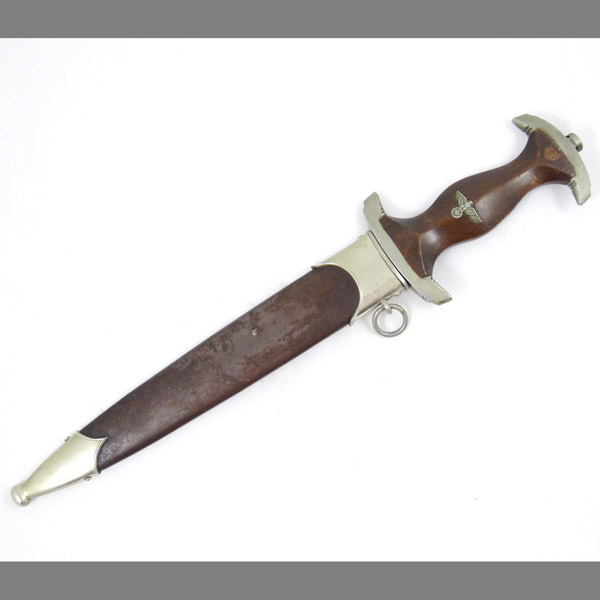 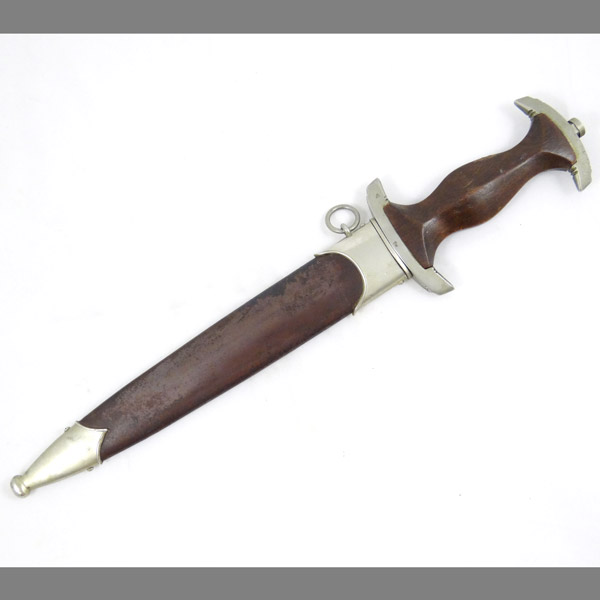 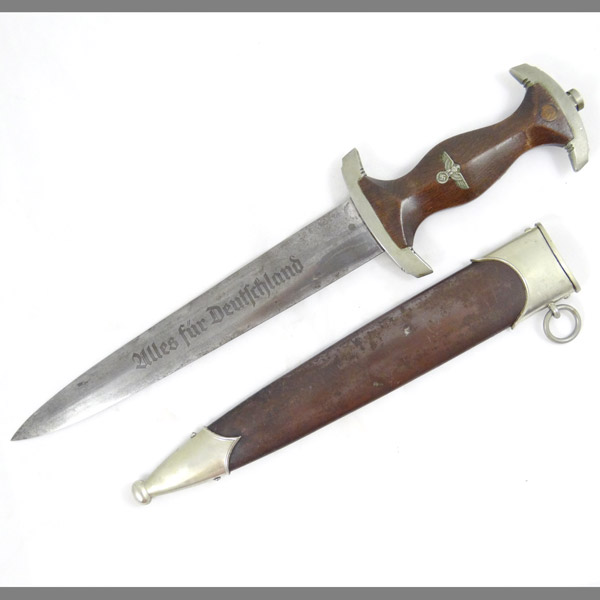 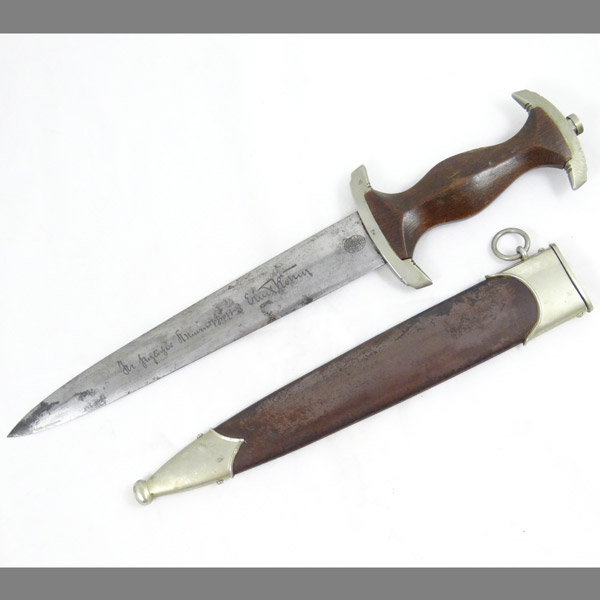 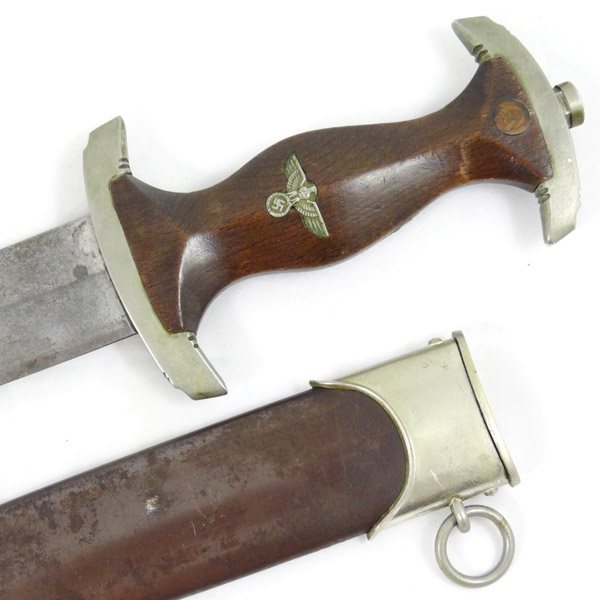 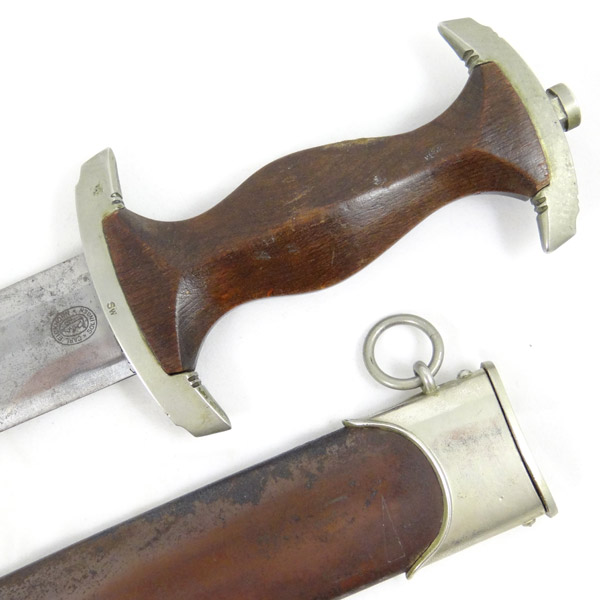 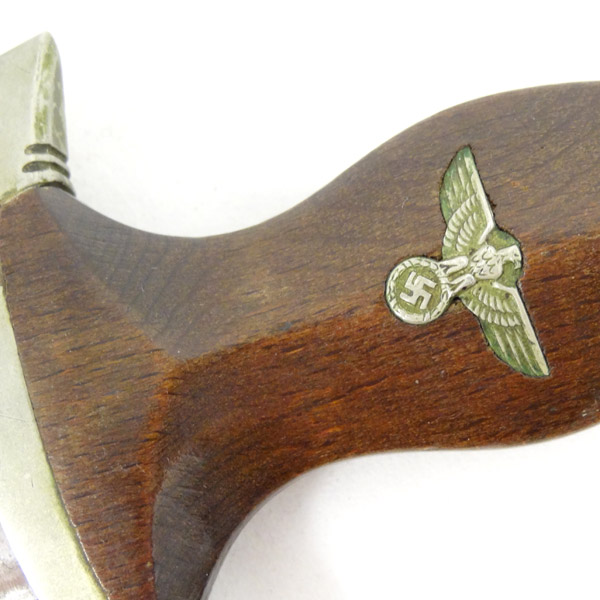 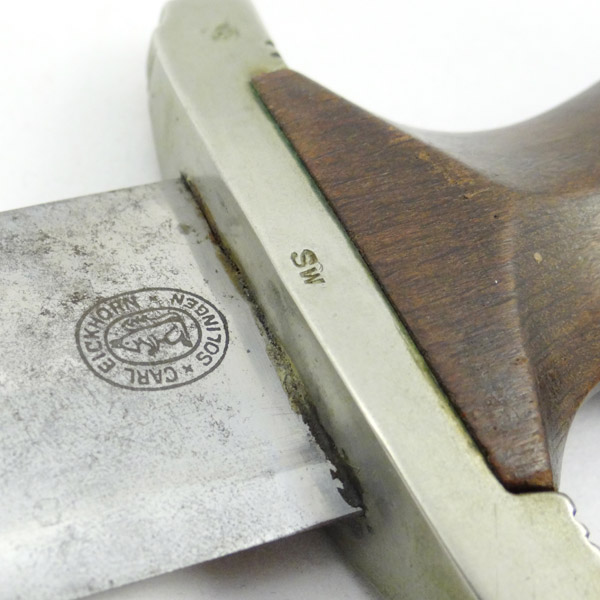 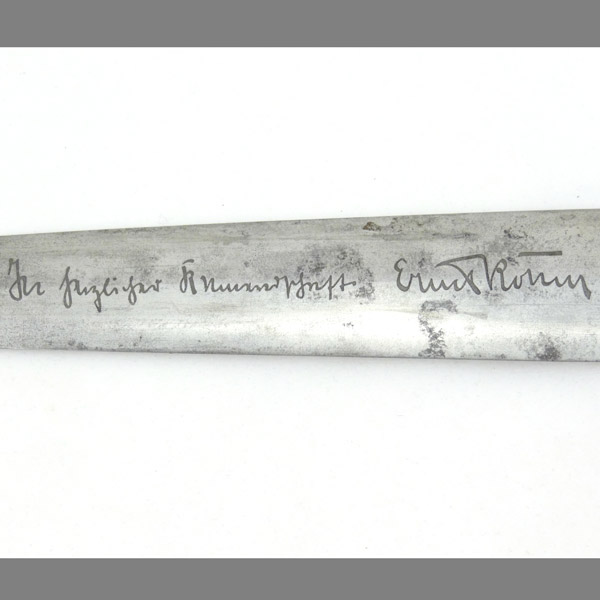 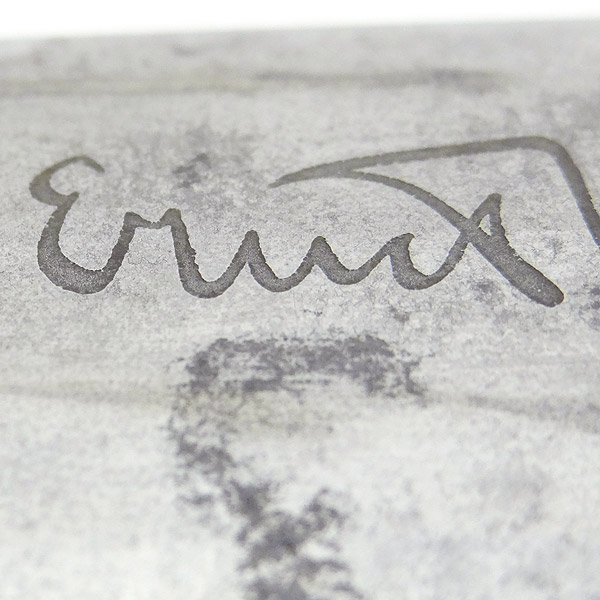 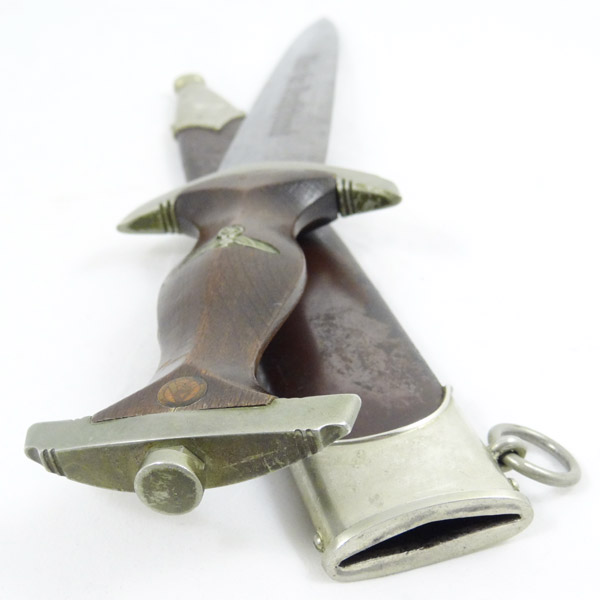 Here’s a real find for SA dagger collectors, a Carl Eickhorn SA Dagger with full, untouched Ernst Röhm inscription. Starting at the grip we find a classic and desirable highly pronounced Eickhorn wood grain, with only modest use wear to include several minor, and a couple more pronounced dings and scratches…

Starting at the grip we find a classic and desirable highly pronounced Eickhorn wood grain, with only modest use wear to include several minor, and a couple more pronounced dings and scratches. One of the more obvious scratches could be mistaken as a crack in the photos due to the way it extends across the wood grain about an inch below the SA roundel on the front side of the grip. There are no notable cracks in the wood, and only one very minor chip on the upper right corner where the wood meets the downward extending “L” of the upper guard. Both solid nickel guards are in beautiful condition, with the lower guard group stamped with the letters “Sw” (Sudwest). The top of the upper guard, as well as the top of the pommel nut show heavy patina, which is inconsistent with the other metal fittings, which may indicate a cleaning at some point in the dagger’s lifetime. That being said, there are no signs of tampering to the pommel nut, and the verdigris between the guards and grip are consistent with an untouched dagger. The SA roundel shows some moderate age toning, but the enamel is 100%. The eagle has about 98% of it’s factory detail, with standard use wear in the typical areas of the legs and breast. There is an interesting flaw in the die cutting of the left Swastika arm, a flaw that I’ve only seen one other time on an SS dagger. During the manufacturing process the dies would sometimes get plugged and fail to cut the intended areas. I viewed this area under a high powered magnifier and believe this to be one such occurrence. A nice little bonus to an already rare dagger!

Moving to the blade, we see quite a bit of moisture damage from years of storage inside the scabbard. Although we’d all prefer to find perfect daggers with perfect blades, we can’t pass up a full Rohm no matter the condition. In this case, the overall condition of the dagger makes up for the blade’s imperfect condition. Despite the spotting throughout both sides of the blade, the motto and Ernst Rohm inscription are very crisp and pronounced, with a nice consistent medium gray tone – same with the Carl Eickhorn maker’s mark.

The scabbard is a nice anodized type with the normal aging and oxidation we know to be typical with this type of scabbard. The solid nickel fittings have nice color, with only modest use dings and no serious issues to note. The screws do not appear to have been tampered with, and the tip ball is 100%.

Overall this is a stellar example of a full Röhm SA Dagger. When judging the blade flaws in conjunction with the condition of the rest of the dagger, they’re easy to overlook. A solid collector piece for sure!